Last week, fellow foodie pal Laura and I went to a great lecture starring some of the preeminent voices in food writing of the past few decades. A big highlight for me was meeting my very own doppelganger--famed food writer/cookbook author/ Molly O'Neill.

"The Other Molly O'Neill" has always been a bit of a legendary, mythical persona to me, ever since I was a little girl and my Grandpa used to send me clippings of her New York Times restaurant reviews with scribbled notes in the margins about all the fancy dinners that "I" was having. She's become even more of a fantastical figure to me since I started orbiting in the NYC book/publishing world too--mistaken googling and other mixed information has meant that over the past few years, I've gotten dozens of interview requests, phone calls, Facebook friend requests and even autographing requests on her behalf (it's also given me a bonus secret superpower: the ability to score Very Nice tables at fancy restaurants that I, alas, mostly can't afford). We'd been put in email contact once (by a mutual author colleague who found the Tale of Two Molly O'Neills most amusing), which delighted me inordinate amounts, but I'd never met her in person before, nor had I ever heard her speak. I'm delighted to report that "the other Molly O'Neill" is smart, witty, and a fantastic public speaker--absolutely everything you could hope for in a doppelganger!

The purpose of the lecture, though, was not to test out whether a meeting of doppelgangers would break the time-space continuum (thankfully, both time and space seem to have survived the event just fine), but a discussion of the legacy of Craig Claiborne, another famed food writer. 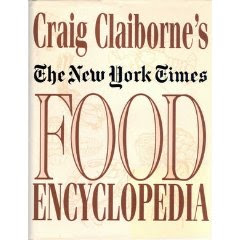 Craig did much to bring food writing and foreign cuisine into the forefront of American cultural awareness in the 1950s, a time when conversation about food rarely happened outside the home, and when palates were decidedly non-experimental--for example, he's credited with creating the 4-star system of restaurant reviewing still used today. (Did you know that a certain point in time, banks often financed restaurant loans based in large part on the number of stars the New York Times had given to a chef's preceeding restaurants?) He also brought many then-unknown chefs from all across the country into the public eye, as the forerunners to today's celebrity chefs.

Many of the panelists and the audience members at last week's event had known Craig personally, and had their own careers influenced by him, so the panel was part lecture, part commentary, and part sharing of personal tales. I was moved almost beyond words at one of the last stories that my doppelganger shared: in his final years, Craig suffered from a number of lifelong health issues that compounded painfully around the same time that later food writers began to, in the natural order of such things, eclipse his legacy with their own fame. But in those last few years, the many NYC chefs and restaurants that Craig had supported and built up for decades, as a food critic and restaurant evangelist, turned around and supported him: not a day went by without a four-star meal being delivered to his home by one of the city's chefs. And according to the panelists, in his last years, he could likewise walk into nearly any restaurant in the city and be treated to a VIP meal, even when he was no longer on the New York Times' staff or expense account.

Stories like that are their own sort of food, I think--feeding the part of us that needs to believe in the goodness of our fellow human beings. And that kind of generosity is perhaps particularly touching to consider in a city like New York, since it so so often gets a bad rap for being a cold, heartless, unfeeling, and impersonal place. Most of all though, that poignant story reminded me of how important community is to all of us, because it gives us opportunities to act upon, and be reminded of, our own humanity. And I couldn't help but think quietly, but proudly, that our own community of authors, illustrators, and publishing compatriots would (and certainly has, as I can think of dozens of such examples) rally in the same way for one of our own--not out of obligation, but out of that same sense of family-like loyalty. Lucky us.
Posted by Molly O'Neill at 10:51 PM

Email ThisBlogThis!Share to TwitterShare to FacebookShare to Pinterest
Labels: Around NYC, Art and Life