CONTEST!!!, Or, Janet Reid is Sneaky and You Stand to Benefit. 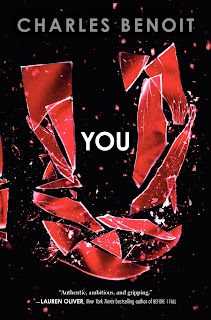 If you've met me at a publishing event in the last 15 months or so, or if you follow me on Twitter, or if you're my friend on Facebook, you've probably heard me talking about this book, YOU, the debut YA from Charles Benoit.

YOU is without a doubt one of the most important books I'll have a part in bringing to life in my entire career, no matter how long that career turns out to be. There aren't enough adjectives to describe how masterfully crafted Charles Benoit's story is, and how excited we are that he's found his way from the adult mystery world into writing YA. And working beside my amazing boss on YOU has been a phenomenal experience--15 months after our first reads of it, we're still unable to stop ourselves from talking about it near-constantly. Most of all, the support of the children's/YA writing world for this new-to-our-world author and his story has been inmmensely humbling. The ARC, in fact, looks like this: 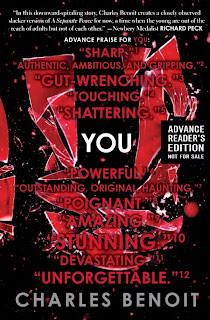 It's gotten more early praise than we could even fit on the cover! As we like to say, "People are talking about YOU." (And yes, you really should click each of those links to read the fantastic reviews and conversations that are starting about this book.)
So why am I showing you the ARC? Because you have a chance to win it. Head over to Agent Janet Reid's blog, where she's doing the Robin Hood thing of snitching ARCs and giving them to the masses, ergo YOU stand to benefit. But hurry! The contest ends at high noon on Sunday.
And then on August 24th (a mere 96 days from now!) get yourself to a bookstore and buy this astonishing book (or, you know, go pre-order it right now in anticipation), and read it and share it with everyone you know who works with teens, or is a teen, or has ever been a teen. And then you, too, will be one of the many people talking about YOU.
Posted by Molly O'Neill at 10:04 AM 3 comments:

Email ThisBlogThis!Share to TwitterShare to FacebookShare to Pinterest
Labels: Book Love, Books I've Helped Make, Contests, Why I Work in Publishing, YA

I've been pondering the notion of "belonging" over the last few days, trying to piece together this blog post. True to form, all the scattered bits of my ideas converged mentally while I walked the 10 blocks home from the subway to my apartment last night. (Hence the name of this blog, as well as proof that, for the sake of the blog, I should never-ever move--even if the piles of books that regularly threaten to entirely take over my wee studio apartment do eventually win by crowding me into having only one tiny corner allowed for all the non-bookish parts of living....)

Last week, I visited a friend who just adopted a sweet dog from an animal rescue organization. I expected the dog to perhaps be skittish or shy...she'd only been in her new home for two days, after all. Instead, she was calm, and politely interested in meeting me, if perhaps a little less excited about the whole encounter than I was. Why? Well, it became very clear over the course of my visit was this was a dog well on her way to being vastly content. Why? Because my friend belonged to her now. In two short days, Madeline-the-dog (named for this Madeline, of course) had already claimed her new owner in a complete, wholehearted way. And not that I didn't love my friend before, but I left her apartment a few hours later smiling, because, well, I think it's impossible to not change for the better anytime one is loved fiercely, whether by person or by beast. In short, I think it's quite likely that my friend is going to become an even better person than she already is, now that she belongs to a dog. (Hmm, I suspect I must take advantage of this opportune moment for book suggestion, even if it ruins the evocative mood of this blog post. Need a picture book to articulate the small but critical difference/nuances between a dog belonging to a person, and a person belonging to a dog? Try the Christmastime charmer The Puppy Who Wanted a Boy or, the poignant and pitch-perfect Orville: A Dog Story.)

Thinking later about this idea--the peculiar loveliness of belonging and how it changes us--made me flash back to an understanding that's bubbled up in me the last few times I've traveled. Over the last year or two, I've gotten into the habit of, whenever possible, taking late-night flights back into NYC instead of daytime ones. To me, there's something breath-taking, and breath-giving at the same time, about descending from a dark sky toward Manhattan's city-island full of lights. It goes deeper than just being a sight that's "magical," or any adjective one might use to describe beauty. It's even somehow beyond the simple notion of home. It's more about a sense of completeness. Trying to articulate how it makes me feel to a friend recently, the only way I could express it was to say that flying into the light-filled city reminds me that, after eight years here, I belong to New York now. It feels as if NYC is reaching out to reconnect and reclaim me as its own. And this often-hard-but-always-glorious city makes me a better person, I think, because I belong to it.

In a similar sort of way, a certain handsome guy in my life belongs to a particular corner of the Pacific Ocean, because he grew up surrounded by its waters. I've watched him for years, observing the fact that if he's away from "his" ocean too long, he becomes jittery, stress-laden, unhappy. By contrast, even a short trip back to visit it gives him a sense of peace, and returns him to his most complete self. In a mysterious, hard-to-define but definite way, I think it's fair to say that he's a better person purely because he's spent his life belonging so intensely to that ocean, even when he's far away from it.

And the "click" moment of last night's ten block walk: that this all connects, and deeply, to a line from one one my very favorite lyrical, literary YA novels, Cynthia Rylant's I Had Seen Castles:

"I want to have that morning. The walk to school with the guys, the banter, the wisecracking, the cuffing and shoving that boys must do to claim ownership of each other."

I've loved that line since the very first time I read it, because it expresses something so entirely true. That is exactly how pre-teen boys act, exactly why their rough-and-tumble antics are actually so important, because they reveal their feelings of belonging to their tribe, and to each other, on their way toward becoming themselves.

So. Ownership. Belonging. You could call it connectedness, too, I think. As I think about it, I realize these are transformational words, transformational experiences. It seems there's something about belonging--to a person, to an animal, to a place, to an idea, even--that makes us our best selves, makes us more whole. Why is that? Does anyone know?

I think it's time to end my rambly thoughts on the idea here, but I know it's one I'm going to keep pondering. And I'd love to hear your own thoughts and responses and ponderings in the comments. And I'm curious, too, of course. Outside of the most obvious answer of your family, your beloved ones--who or what or where do you belong to, in a way that transforms you, that makes you your best self, that makes you more whole?
Posted by Molly O'Neill at 10:04 AM 20 comments: