In case you were wondering 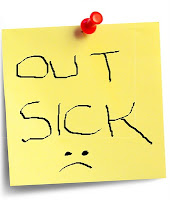 So there's been an utterly wicked Publishing Plague going around: last week I had it, and this week literary agent Michael Bourret has it, even though we're on opposite sides of the country. (The Evil Publishing Plague is undaunted by geography, apparently.) All to say, we haven't forgotten about our middle grade conversation blog series; it's just been waylaid, b/c if we'd tried to have a conversation in the last two weeks, it would have been all hopped-up on Sudafed and miserable and most likely incoherent, too. Anyway, we promise we'll get back to it soon! And thanks again to all who've read and contributed questions and shared the conversation thus far. You writers rock.
Posted by Molly O'Neill at 7:54 PM 2 comments:

Email ThisBlogThis!Share to TwitterShare to FacebookShare to Pinterest
Labels: lame explanations and excuses

New favorite article of the week

The New York Times has begun what promises to be a *fantastic* series called "Draft," on the art & craft of writing. (Please go check it out, so they get good traffic/stats and choose to continue it!) Here's an excerpt from one of the pieces, by Pulitzer winner Jhumpa Lahiri, who is a master of powerful, evocative writing:

“For surely it is a magical thing for a handful of words, artfully arranged, to stop time. To conjure a place, a person, a situation, in all its specificity and dimensions. To affect us and alter us, as profoundly as real people and things do. . . .
We encounter books at different times in life, often appreciating them, apprehending them, in different ways. But their language is constant. The best sentences orient us, like stars in the sky, like landmarks on a trail.”
Ahhhh....isn't that all just so perfectly captured, so elegantly true?

Email ThisBlogThis!Share to TwitterShare to FacebookShare to Pinterest
Labels: Book Love, Inspiration, On Being a Reader, On Writing, Wise Words/Quotations

Five articles worth reading this week

1. This great article that talks about the neurological effects of reading. If you're a brain science nerd like I am (for me it boils down to a fascination with understanding the things that make us human), or simply someone who likes when reading/storytelling make news, you'll probably appreciate this, too.
Sample: "A psychologist...concluded that there was substantial overlap in the brain networks used to understand stories and the networks used to navigate interactions with other individuals — in particular, interactions in which we’re trying to figure out the thoughts and feelings of others. Scientists call this capacity of the brain to construct a map of other people’s intentions “theory of mind.” Narratives offer a unique opportunity to engage this capacity, as we identify with characters’ longings and frustrations, guess at their hidden motives and track their encounters with friends and enemies, neighbors and lovers."

2. The text of a commencement speech given to West Point grads three years ago. It's long, but offers a really compelling definition of leadership by way of also discussing the critical roles of vision, solitude, courage, introspection, literature, and friendship.
Sample (which isn't talking about writing fiction, but oh, how it could be!): "I find for myself that my first thought is never my best thought. My first thought is always someone else’s; it’s always what I’ve already heard about the subject, always the conventional wisdom. It’s only by concentrating, sticking to the question, being patient, letting all the parts of my mind come into play, that I arrive at an original idea. By giving my brain a chance to make associations, draw connections, take me by surprise. And often even that idea doesn’t turn out to be very good. I need time to think about it, too, to make mistakes and recognize them, to make false starts and correct them, to outlast my impulses, to defeat my desire to declare the job done and move on to the next thing."

3. A legendary magician offers his career secrets via an email exchange with a young admirer. I want to quote like six different passages from this, so really, you should just go read it, even though it, too, is lengthy. It's not about writing, but it IS about the creative life and I suspect you'll see the links just as I do. After all, making magic and making stories have a lot in common....
Sample: "Surprise me. That's it. Place 2 and 2 right in front of my nose, but make me think I'm seeing 5. Then reveal the truth, 4!, and surprise me. Now, don't underestimate me, like the rest of the magicians of the world. Don't fool yourself into thinking that I've never seen a set of linking rings before and I'll be oh-so-stunned because you can "link" them. Bullshit. Here's how surprise works. While holding my attention, you withold basic plot information. Feed it to me little by little.  Make me try and figure out what's going on.  Tease me in one direction. Throw in a false ending.  Then turn it around and flip me over."

(Aside: like many of my best internet discoveries, items #3 and #4 on this list came to my attention via my pal @brainpicker. If you're not following her or reading her blog, you should be, as she is a constant treasure-trove of interestingness and inspiration.)

4. I don't always agree with Laura Miller's Salon.com articles about publishing, but this look inside publishing the juggernaut otherwise known as The Hunger Games is one of the best journalistic looks I've seen at the strategic, carefully-layered work it takes to build success in the kids' book world. Even more importantly, it emphasizes what I tend to think is and always will be the most important truth of the industry, no matter how it morphs: the children's book world is a business built on personal relationships.
Sample:  "It’s hard to imagine the first book in any adult series being greeted with a comparable level of grass-roots hoopla: buzzed, booktalked and big-mouthed for months before it appeared on any bookstore display table . . . "We got it in the hands of the right people. That’s what publishers do,” van Straaten said. "You’re leveraging one thing to build the next thing. You need the enthusiasm internally to convince that first layer of gatekeepers. Once you have the kudos of those people, you can get these people, and so on.'"

5. Um, actually, my list only goes up to number four today. So you tell me: what article did you find recently that others should read? Leave links in the comments, and thanks!
Posted by Molly O'Neill at 3:56 PM 3 comments:

Everything You Ever Wanted To Know About Middle Grade, Part 2: Technology and Gender and Marketing, Oh My!

This is Part Two in a series of online coversations between Dystel & Goderich literary agent Michael Bourret and myself, HarperCollins Children's Books editor Molly O'Neill, about middle grade books. If you missed the first part of the conversation, you can read it here.


MO: Zoinks! (Michael, we're going to get sooooo many submissions with that little joke from now on. I hope it was worth it!) Thanks to everyone who read/commented on and/or shared our first MG chat, and for coming back to read more. Your response definitely affirms something we've both been feeling: that the industry is definitely on the look-out for GREAT middle grade.
What does "GREAT" middle grade mean, though? I guess like any sort of fantastic writing, great middle grade rises above the present moment and hopefully establishes itself as not just meaningful for readers today, but as a lasting part of the literary landscape. Sure, technology is changing the way we promote and even read books--though for middle graders, e-readers aren't quite as pervasive as they are for teens or even adults, just like the way it took a while for cell phones to trickle down into tween hands, once upon a time. And it's harder for us to market directly to younger readers since COPPA laws limit the ways we can target that readership, so I suspect that we're always going to be reaching out to gatekeepers (parents, teachers, librarians, etc.) as much as our ultimate readers for this genre. Which makes sense, because as a middle grader, the people in your life who model a love of reading can be a big reason a kid becomes a reader. And if the emotions and situations and relationships in a story ring true, and the creative imagination behind it transports reader after reader, that's part of what makes a book great--and why it will endure through generations of readers, no matter what format or delivery system or marketing vagaries might exist.

"Zoinks, bud!" And other thoughts on middle grade novels.

As promised in my last post, literary agent Michael Bourret and I started a chat about middle grade fiction. You can read the first part over on his agency's blog today. We hope you find the conversation as interesting as we did!

P.S. Check back here on my blog in a week or so for a second installment!
Posted by Molly O'Neill at 10:01 AM 1 comment: