I confess, it's a mite hard to come back to work after a week's vacation involving peaceful, miles-away-from-NYC moments like this: 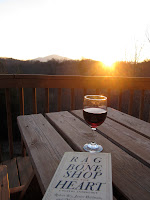 and blazingly lovely sunsets over distant mountain-tops like this. 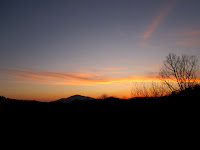 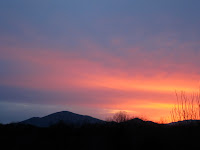 Okay, but I also confess that I'm leaving out all the days and nights where it rained and rained and rained, making highly-anticipated events like late night ghost stories around a campfire wholly impossible. (Despite the lovely fire pit that taunted us daily with its too-damp firewood.) 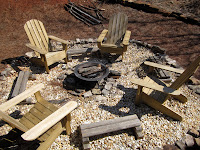 This weather tragedy, in turn, forced us to use up an entire bag of jumbo marshmallows playing Chubby Bunny instead of using them for s'mores/toasting purposes. And oh, how I would love to post those photos, but Travel Companion would disown me if I did so, given that few people look entirely flattering with nine jumbo marshmallows stuffed in their mouths. (For the record, I wussed out after six jumbo marshmallows, but mostly because I was laughing too hard to continue.)
But despite too much rain, a happy and creatively fulfilling vacation was enjoyed. And despite the foreboding signs that warned us that The Lone Zombie might be lurking in the woods around us,

we stumbled (err, deliberately off-roaded in the rental car) our way into some delightfully unanticipated scenic overlooks. 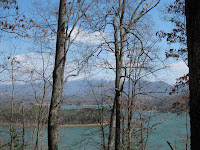 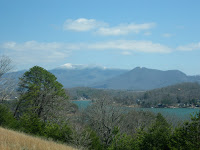 All of which reminds me of one of my favorite quotes (if you've heard the "Traveler or Tourist" talk I sometimes give at writers' conferences, you've heard this one before):
“Happiness on holiday often only comes when we get lost—in the alleys behind the great museum, in a market off the Grand Canal, in olive groves beyond the guidebook recommended town. We are suddenly among people that are not “extras” in a travelogue, but simply themselves. We shed our tourist guise and rediscover living.”— Australian poet Pam Brown
I'm convinced that the best traveling memories are often found in the moments we do not (and usually cannot) plan. The moments where we "get lost." Or when we're forced away from our plans entirely--say, by rain or zombies or an alluring not-quite-a path, wanting to be explored.
And so very often, the same premise holds true in writing, too. (You knew I'd bring all this back around to books and writing and editing somehow, didn't you?) Sometimes, it's the wholly unplanned-for plot twists, the previously-unanticipated character developments, the subtle details that were never even conceived-of in your outline or original draft, that come to matter most. They can slip in quietly but become critical elements or perfect lines or most-beloved scenes in a book. And when you're forced to discard your initial perceptions of what you thought a story would be, sometimes you get the delight of seeing it transform into something else--something more fully alive and blazingly memorable than you even initially imagined it could be. (Okay, the truth is, sometimes unanticipated tangents are just dead-ends or rabbit holes that lead you wildly, unproductively astray. But I hope that at least sometimes, you also get the glorious kind of unplanned results, too!)
So, you tell me--what's one of your best entirely unplanned-but-memorable traveling stories? Or, for the writers--one of your completely-unexpected-but-later-deemed-brilliant story shifts that changed everything about what you thought you were writing? Or both? Tell me in the comments!
Posted by Molly O'Neill at 2:08 AM

Email ThisBlogThis!Share to TwitterShare to FacebookShare to Pinterest
Labels: Art and Life, Being Human, Not-NYC, On Writing, Ponderings, You Tell Me